Officials with Portland’s Biketown are keen to kick-start sales because because annual memberships, along with corporate sponsorship, are key to sustaining bike-share programs. They’re hoping to sign up 1,000 annual members before launch day, and they’re offering incentives in hopes of reaching that goal.

Annual memberships, which will be available Tuesday at biketownpdx.com, will cost $12 a month, with the first 500 receiving one month free, paid for by the Metro regional government. The first 1,000 members will get a T-shirt and a limited-run “founding member” keycard to access bikes.

A membership entitles riders to 90 minutes of ride time a day, with additional time charged at 10 cents a minute.

The program will also launch with per-ride and day pass options. A single trip of up to 30 minutes will cost $2.50. A day pass for up to 180 minutes in a single day will cost $12.

The transportation bureau also identified where it will put 100 stations, where bikes can be rented and returned. (Bikes can also be left at any public bike rack for an added $2 charge.) 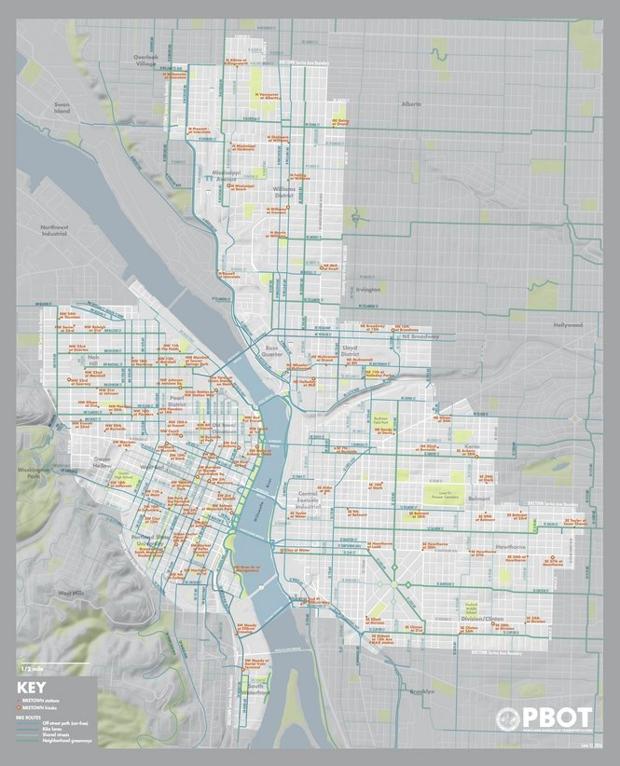 Steve Hoyt-McBeth, a transportation bureau project manager, said he wishes the program had enough resources to be twice the size.

“If we had 200 stations, we could easily have put down 200 stations,” Hoyt-McBeth said.”But we had to make some hard choices.”

Stations were selected in part based on an online survey, but Hoyt-McBeth said the city made a concerted effort to put stations near areas with heavy foot traffic and near affordable housing.

“Bike share works best not only when you put stations in high-demand areas, but also when you have a high level of service within that area,” he said.

Of 100 bike-share stations, 20 will be outfitted with kiosks where people can sign up for an account. (People who have previously used bike-share can reserve a bike using its onboard computer rather than the kiosk.)