Wouldn’t you know it: yet another Rio Olympic venue is under fire for dangerous terrain that received inadequate attention.

“I’m surprised someone signed off on a course this hard,” New Zealand cyclist George Bennett, who finished 33rd in Saturday’s men’s road race, told The Washington Post. “It’s hectic, it’s dangerous. There are slippery roads, patches of oil, difficult corners. It could send you home early.”

Just ask these five cyclists who are still recovering from the heart-stopping crashes that eliminated them from medal contention in their Olympic races.

Annemiek van Vleuten was comfortably in the lead on Sunday, only 6 miles away from a storybook ending to what she called the “best race of [her] career,” when she suffered the most horrifying crash of the Olympics. On the course’s final descent at Vista Chinesa, van Vleuten lost control of her bike and somersaulted over the handlebars, crashing headfirst into a side wall and losing consciousness immediately. As she lay limp on the side of the road, her bike flipped once more in the air before landing a few feet farther down the hill.

Van Vleuten, 33, the 2011 Women’s Road World Cup champion who was seeking her first Olympic medal, was rushed to the hospital where she was treated for three broken vertebrae and a concussion.

On Tuesday morning, van Vleuten posted a photo on Twitter that showed her in stable condition but with several facial cuts and bruises, including a gnarly black eye. 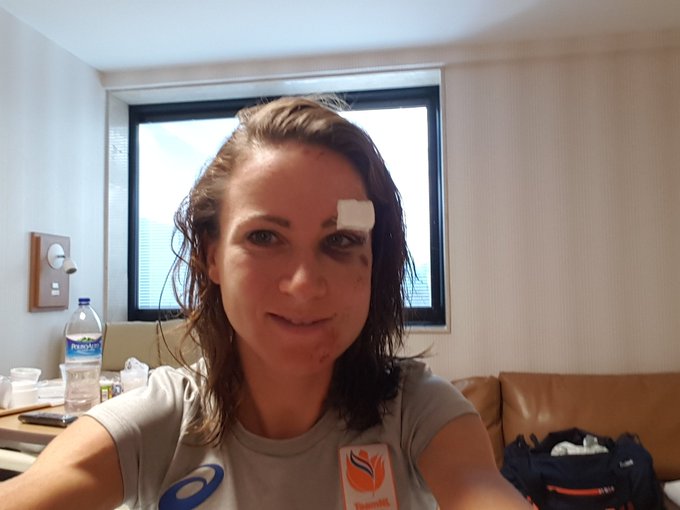 Unlike van Vleuten, Thomas managed to get back on his bike and finish 11th — one spot ahead of compatriot Froome — but large rips in his uniform and scrapes on his bottom served as sad reminders of a lost opportunity.Geraint Thomas, a favorite to medal in Saturday’s men’s road race along with fellow Brit and three-time Tour de France winner Chris Froome, was part of a six-man group that had opened up a 30-second lead on the rest of the pack when Vista Chinesa struck. Passing two cyclists who crashed out on the descent ahead of him, Thomas saw his chance to grab the lead. His moment of glory was short-lived as he suffered a similar fate, sliding off the road and into a gutter.

About to run into a dirt obstacle, Samad Pourseyedi unclipped from his bike and flew across both lanes of the road right into a wall and protruding tree trunk. The 30-year-old, competing in his first Olympics, was forced to forfeit the race and go through concussion protocol after the crash.

Even if a cyclist succeeds in evading the steep descents and cobblestone turns, flying objects are an obstacle on Rio’s race course that are impossible to predict, as Ahmet Orken learned Saturday with frightening results. Riding through the road’s 2-kilometer cobblestone section along the beaches, Orken saw several of his opponents lose parts off their bikes — including chains they had to stop to repair before continuing. What he did not see was the water bottle that fell in his path and sent him crashing out of the race. 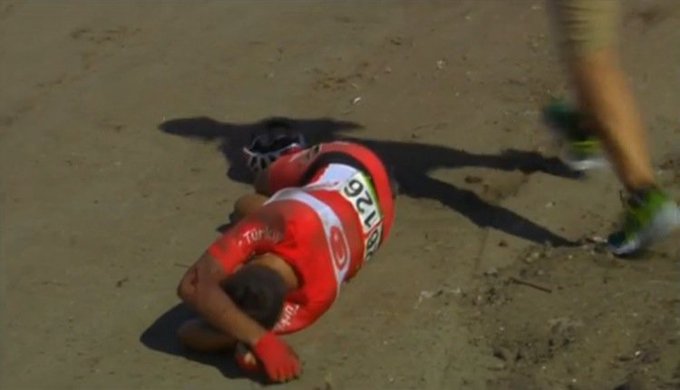 This Olympic indoor track cyclist showed that the accidents in Rio are not limited to the road. During Australia’s training session in Rio’s velodrome, a group crash jeopardized Mel Hoskins’ Olympic campaign. She was laid on a stretcher in obvious pain and sent to the hospital to evaluate her injured hip. Hoskin’s setback is a major blow to Australia, which was heavily favored to win gold. The team finished a disappointing fifth at the world championships earlier this year when Hoskins was sidelined with pneumonia. 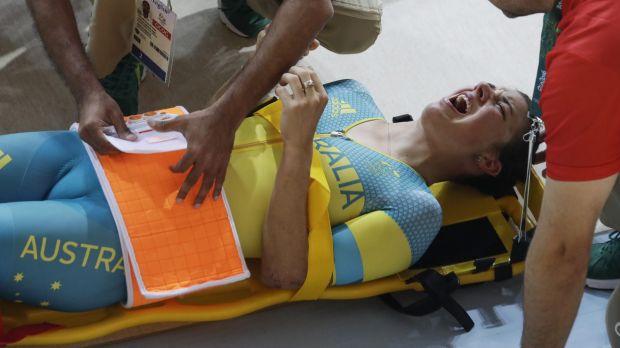 After years of preparation for the most important race of their lives, there was nothing these cyclists could do to prepare for the accidents that wrecked their dreams.